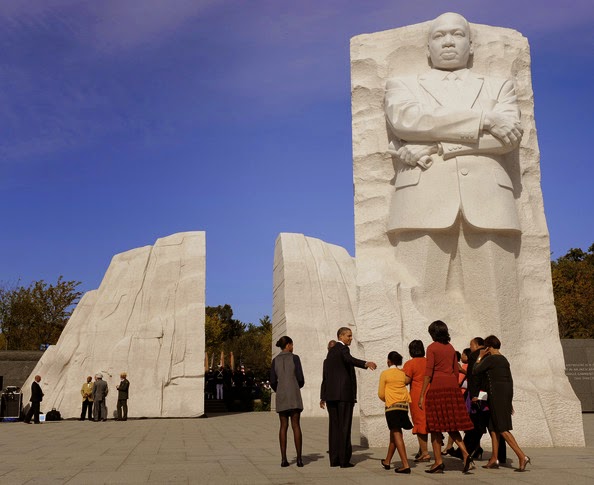 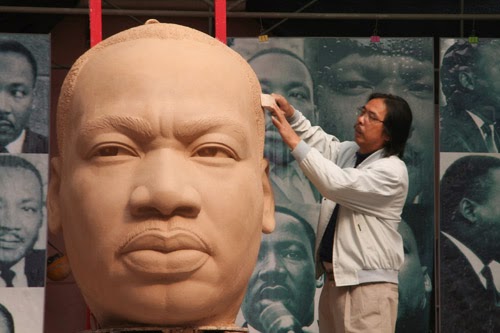 Chinese artist LEI Yixin was modeling MLK in clay, who was selected as the lead sculptor for the project in 2006 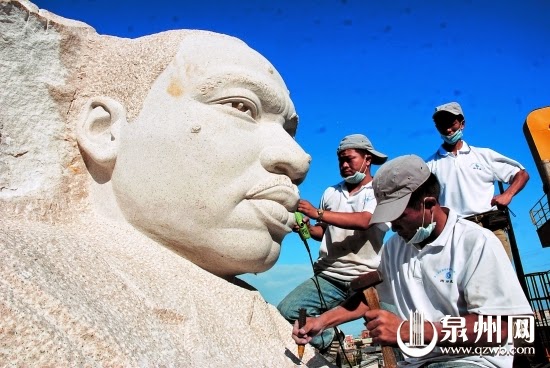 Stone sculptor WANG Xiangrong and his team of 20+ from my town Quanzhou’s Huian were commissioned to carve the giant public monument in pink Chinese granite quarried from Quanzhou's Shijing town in March 2008 until May 2010 the 1,000+ tons of statue was shipped at Xiamen port

The Martin Luther King, Jr. National Memorial spans four acres on the northwest corner of theTidal Basin at the intersection of West Basin Drive SW and Independence Avenue SW, Washington DC. between the Jefferson and Lincoln memorials, facing Jefferson. Visitors will first walk through a grove of spruce and magnolia trees by a waterfall and read a selection of the civil rights leader’s famous words carved on walls. At the end of their walk, they will see King’s likeness emerging from a chunk of granite.
The design is derived from part of King’s famous “ I have a dream” speech when he said,” With this faith, we will be able to hew out of the mountain of despair a stone of hope.” It conveys three themes that were central throughout Dr. King’s life – democracy, justice, and hope. The centerpiece of the Martin Luther King, Jr. National Memorial is the “Stone of Hope”, a 30-foot statue of Dr. King, gazing into the horizon and concentrating on the future and hope for humanity. The sculpture was carved from 159 pink Chinese granite blocks that were assembled to appear as one singular piece， weighed in at over 1000 tons in total.